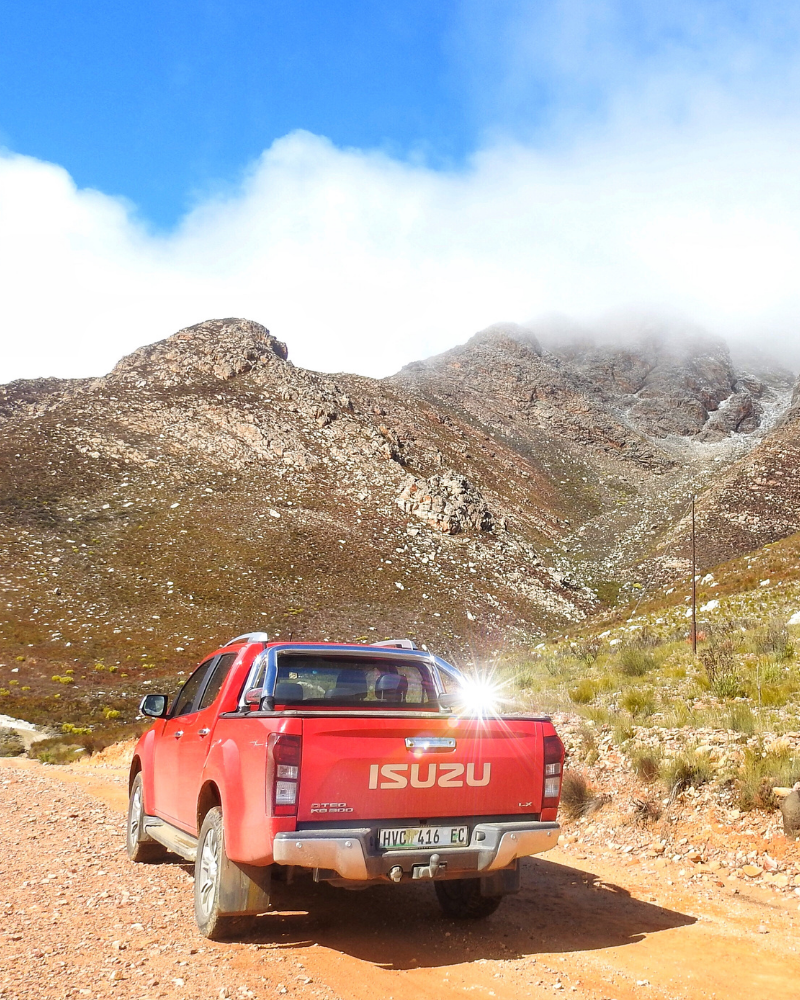 Gamkaskloof: Going Off the Grid

The road to hell 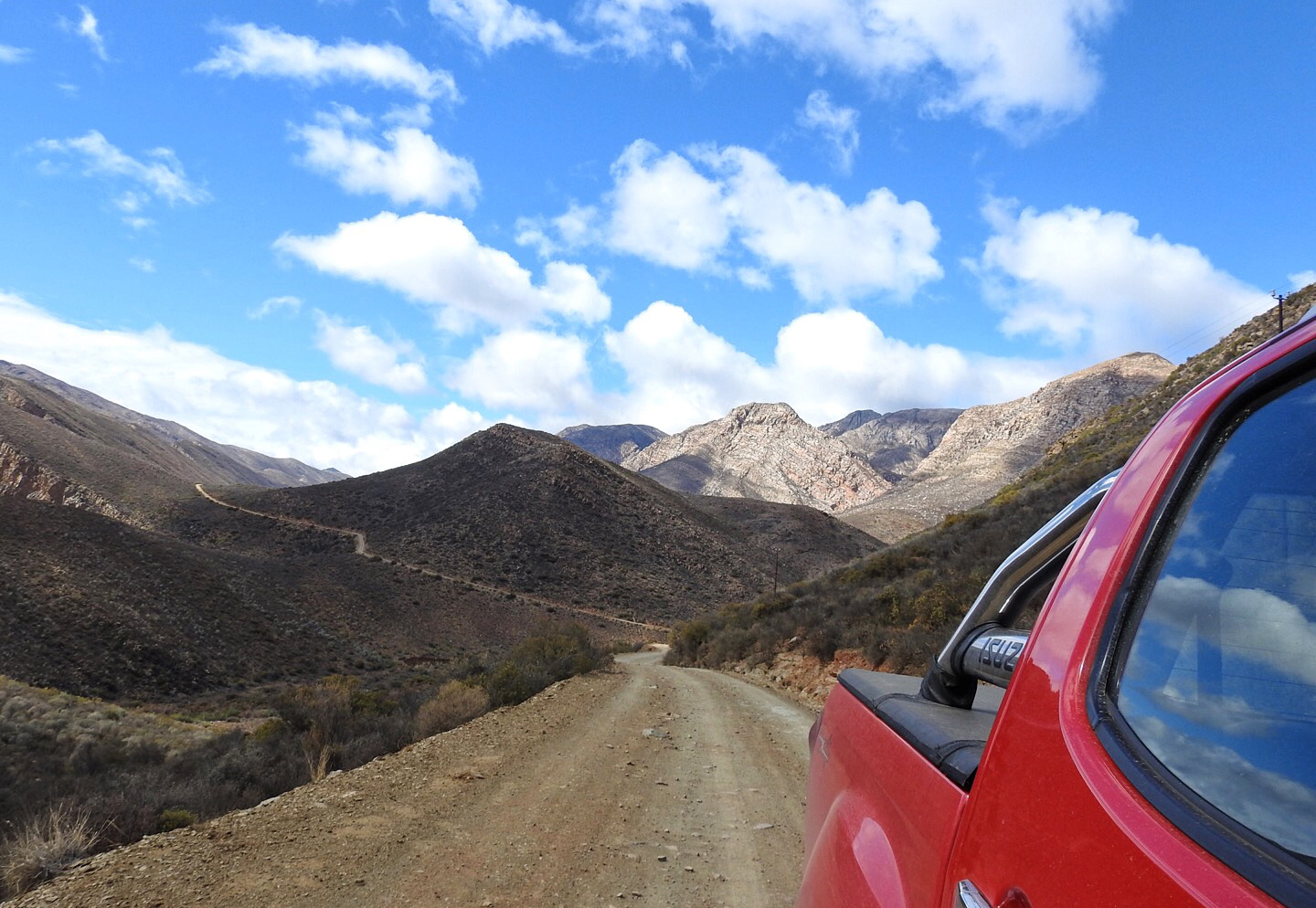 Gamkaskloof: Going Off the Grid

The road to hell

Gently I put my big toe on the accelerator. There’s a sheer drop into the depths of the Swartberg Mountains to my right and a wall of rocks to my left as I go from rocky patch to hairpin-bend to a jaw-dropping mountain view.

A few kilometers ago I had not more than 10 meter visibility on the Swartberg Pass, it was freezing outside and I shrieked when I realised that the Isuzu KB300’s snowflake sign accompanying the 3°C temperature was in fact the truth, the whole truth and nothing but the truth after snowflakes made soft landings on the window. Now it is all gone, white clouds play hide and seek poetically with a sky bluer than blue and in the distance my fate awaits: a narrow dirt road adventurously carving its way through the mountains.

The more kilometers I add on the clock of this legendary 37-kilometers-2-hours dirt road, the more I feel removed from whatever went on in the world when my phone still had signal. It’s just me, my camera, the road and a red Isuzu, the wind beneath my roaming wings as it puts me at ease while tackling the bumps effortlessly.

The Swartberg Mountain folds rise dramatically from the narrow valley, rock layers stood the test of time and vertical slabs are stacked like sardines; a few meters ahead two Klipspringers stand still in a statue pose and then, as the bakkie gets closer, one hops from rock to rock. They’re not alone; there is also other game such as kudus and rhebucks, more than 130 bird species, rarely seen leopards and caracals and it goes without saying that baboons roam here as well. Gamkaskloof forms part of the 121 000 ha Swartberg Nature Reserve, a World Heritage Site since 2004 and it is remarkably diverse, one moment you’re surrounded by proteas and the next you’re in the Karoo-veld with a spekboom here and an aloe there.

There is nothing here; no electricity, signal or plastic entertainment — not even a Telkom line

I stand at the top and peek out of the window to the zigzag road snaking below. For the last time I’m somewhat above, somewhat high; from here on there’s only one way and it is down. Down into Gamkaskloof or, “Die Hel”/The Hell as it is fondly known by many yet the reason for this extreme name is still discussed, still unknown.

The road to “Die Hel” gives meaning to the quote, “it’s not about the destination, but the journey”. This is the last stretch; this is the stretch that is making my heart beat a tiny bit out of my chest, 34 km done and about 3 km more to go.

I take a last photo, put the camera away and take one sharp turn after the other at a speed slower than slow.

I reach a signboard, I’m officially in Gamkaskloof.

In the past the kloof residents lived a very isolated life; they had a school, they had a dominee and a flourishing valley. Before the opening of the Otto do Plessis road, the only way in and out of the kloof was by “The Ladder”, a strenuous cliff path that led to the nearby towns of Calitzdorp and Prins Albert that paved (or rocked) the way forward for the first car to be brought into the kloof in 1958. It took eight men and four donkeys to get the 1938 Morris (bought for R20) into Gamkaskloof and rumour has it that the roar of the engine caused quite a stir for the Gamkaskloofers who have never seen or heard a car before.

Four years later a road opened which connected the kloof with the Swartberg Pass and it changed Gamkaskloof forever; people left, found jobs, and a more modern world outside the kloof. The last remaining farmer waved the kloof goodbye in 1991.

The kloof is filled with stories.

It’s not about the destination, but the journey… but sometimes it is about both.

Both times, I met Oom Zani van der Walt, who said to us (on both visits): “You’re just in time for coffee.” He would then share the most delicious stories; from talking about the old kloof legends to sharing interesting bits from nature. His stories were like a magnet, it draw people back time and again. It draw me back.

Oom Zani and his wife, Anita, no longer live in the kloof, but luckily the stories live on at the Fontein Guest Farm.

Fontein Guest Farm is privately owned by Annetjie Joubert (née Mostert), the last remaining born and bred Gamkaskloofer who opened the kloof’s first guesthouse in 1998 when she restored the original homestead. As the years went by other buildings on their farm got restored into accommodation as well, each with their own story, and camp sites and equipped caravans got added.

When I ask Annetjie’s son, Pieter Joubert who runs the guest farm, shop and restaurant at Fonteinplaas with his wife, Marinette, how they got the caravans into the kloof, he says: “We get anything down here.”

I stay in “Hendrik se huisie”, and lean against the wall of one of the four cottages of Fontein Guest Farm; outside the Joubert children (homeschooled by Marinette) are playing, a rooster breaks the silence and light, much needed, rain caresses the soil.

There is nothing here; no electricity, signal or plastic entertainment – not even a Telkom line. I start to make a fire, light up the gas stove for coffee and pace up and down with a hint of anxiousness in my steps.

I knew I would be disconnected in Gamkaskloof but the voice of no reason nibbles at my mind and whispers in my ear, “what about work, what about work.”

An hour has passed, it is still raining and another coffee pot is boiling on the stove; I reach for my bag and pull out a book and with the turn of every page the nibbles get fewer, the whispers get softer as I sink into the kloof, into a warm down duvet, into simplicity, into the kind of inner-peace that only nature can bring, into the realisation that I need to switch off, disconnect and step away from work more often.

A knock on the door brings me a home-cooked meal; lamb, vegetables, rice and potatoes. Boerekos.

I eat, I read, I add more wood to the fire, and sink further into Gamkaskloof.

Gamkaskloof can only be accessed via the Swartberg Pass from Outshoorn’s side, from the Swartberg Pass turn-off it is 37 km into the kloof and then another 5.5 km to Fontein Guest Farm, then 7 km to Cape Nature’s offices and another 2 km until you reach Boplaas.

Even though there are some nail-biting bits and a lot of bumpy and rocky patches, the road down into the kloof is in a good condition. A high-clearance (not necessarily a 4×4) vehicle is recommended, but patience is more important than the vehicle. Do not rush, your tyres will never forgive you (plus it is foolish to rush on such a road).

There is a variety of accommodation options in the kloof, from camping to staying in some of the old original (now refurbished) houses. Electricity is not available and while some accommodation options have solar panels, others rely on gas or even a donkey (hot water boiler) for warm showers.

I stayed in Hendrik se Huisie (R350 pppn), which is on Fontein Guest Farm. They also have 3 other cottages, camp sites and equipped caravans.

Other accommodation in Gamkaskloof can be found under Cape Nature and also Boplaas.

There is only one restaurant and it is situated at Fontein Guest Farm, lunch and dinner should be organised in advance.

The shop sells a few basics such as cold drinks, beer and chips, but also a big variety of homemade preserves from green figs to aloe jam, all originating from the valley.

Fill up in Oudtshoorn as you won’t find petrol or diesel here, and come with cash, food and all the other necessities you’ll l need during your stay.

Die Hel, or rather Gamkaskloof, can get quite busy during December and Easter holidays, book your accommodation in advance and do not attempt to make a day trip into the kloof.

Gamkaskloof might not be ideal for everyone, but if you want to switch off completely, go on a hiking trail, fish, do some birdwatching or ride your bicycle it is the destination for you. Just the sight of the mountains along the way is a highlight on its own.